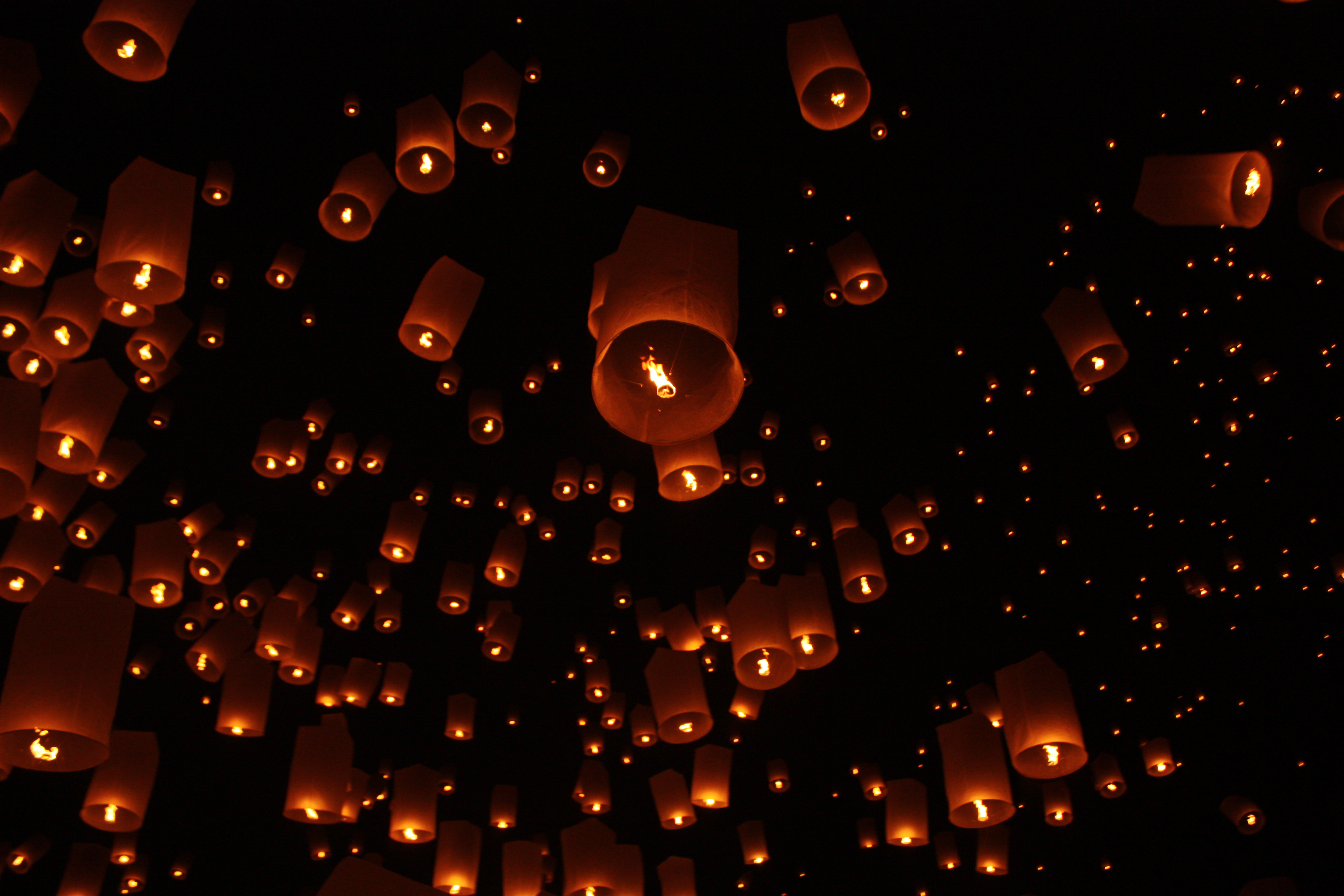 You’d think having cancer and going through chemotherapy would mean bleak and dreary days for the duration of the treatment. Sure, I won’t deny the days when despair would poke my slumbering depression like an annoying poke stick, but Life can be funny in its own way.

One minute it throws you down a hill with a huge boulder barreling down behind you, then the next, you’ll find hot demigod Thor a few meters in front of you. Hot arms, hot bod, hot accent–really, what choice do I have but to run faster? 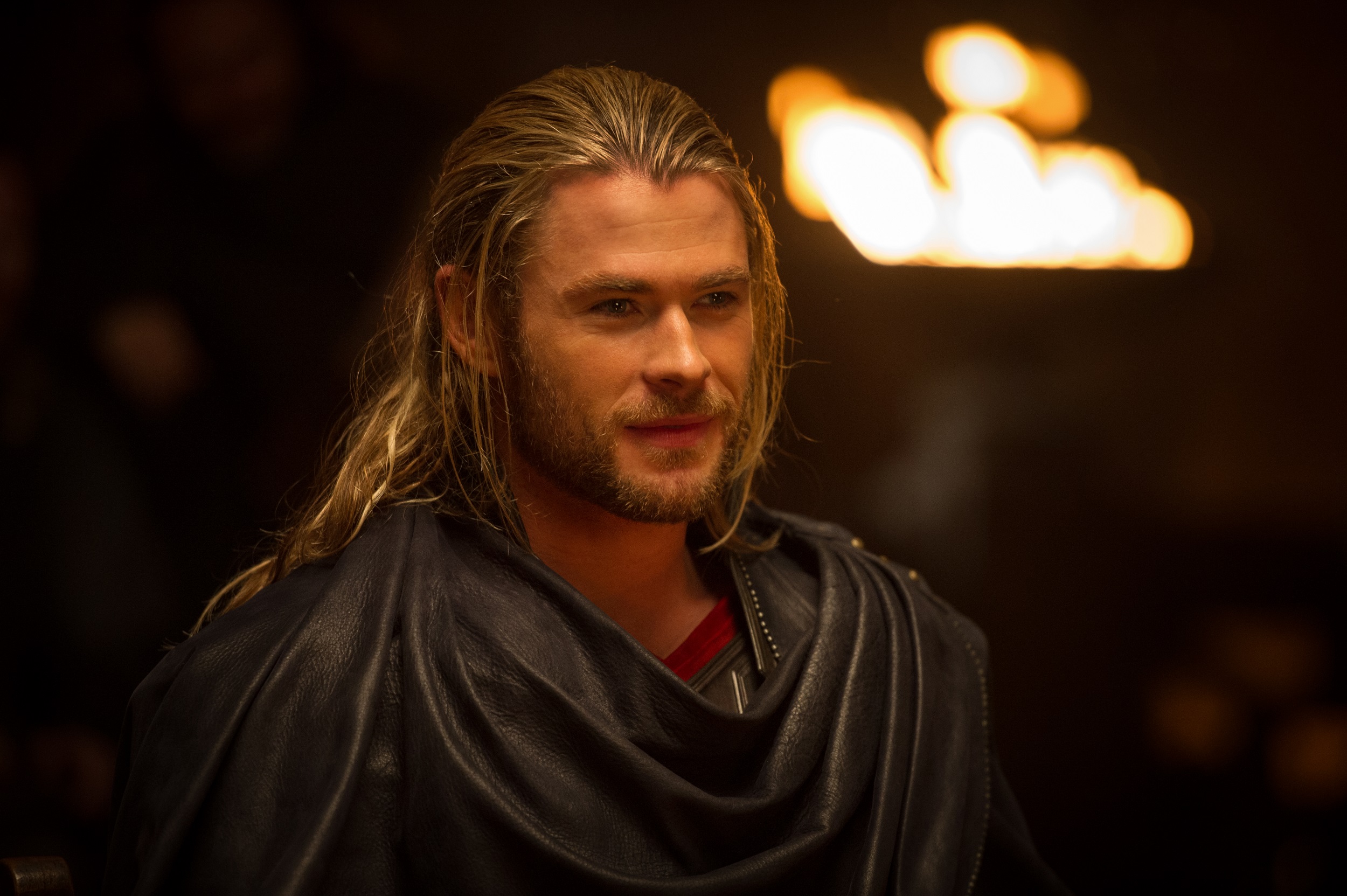 Truth be told, I didn’t know that I would have anything good to write this early in my treatment. I’ve already resigned myself to having a pretty sad life for the next half a year. It’s only been a couple of weeks since my second session (July 31), with the third one in a few hours after posting this. But lo and behold, I already have five things to celebrate.

When everything seems wrong, I learned that small victories would keep you going. And for someone who waged war against Death, winning skirmishes means the world to me.

The cough is caused by multiple lymph nodes around my heart and in my lungs growing to abnormal sizes. The result? Compressed veins. There’s even a major artery in my heart surrounded by huge lymph nodes.

Air couldn’t get in as much as I need when I inhale, which leaves me breathless and easily tired. Heck, I couldn’t even climb one flight of stairs without my chest starting to burn from lack of oxygen. If you tell me to take a deep breath, I would feel insulted. You will also get a free punch in the face, if I still have the energy.

With the cough almost gone, it means the following:

Score one for me, because, you know, breathing is essential to living.

Around June last year, small lumps grew on my neck. As the cancer progressed, lymph nodes also grew on other parts. Most of it, as I’ve said, are in the heart and lung area, while others can be felt (if I let you without yet another free punch). Here’s a helpful image of the lymphatic system: 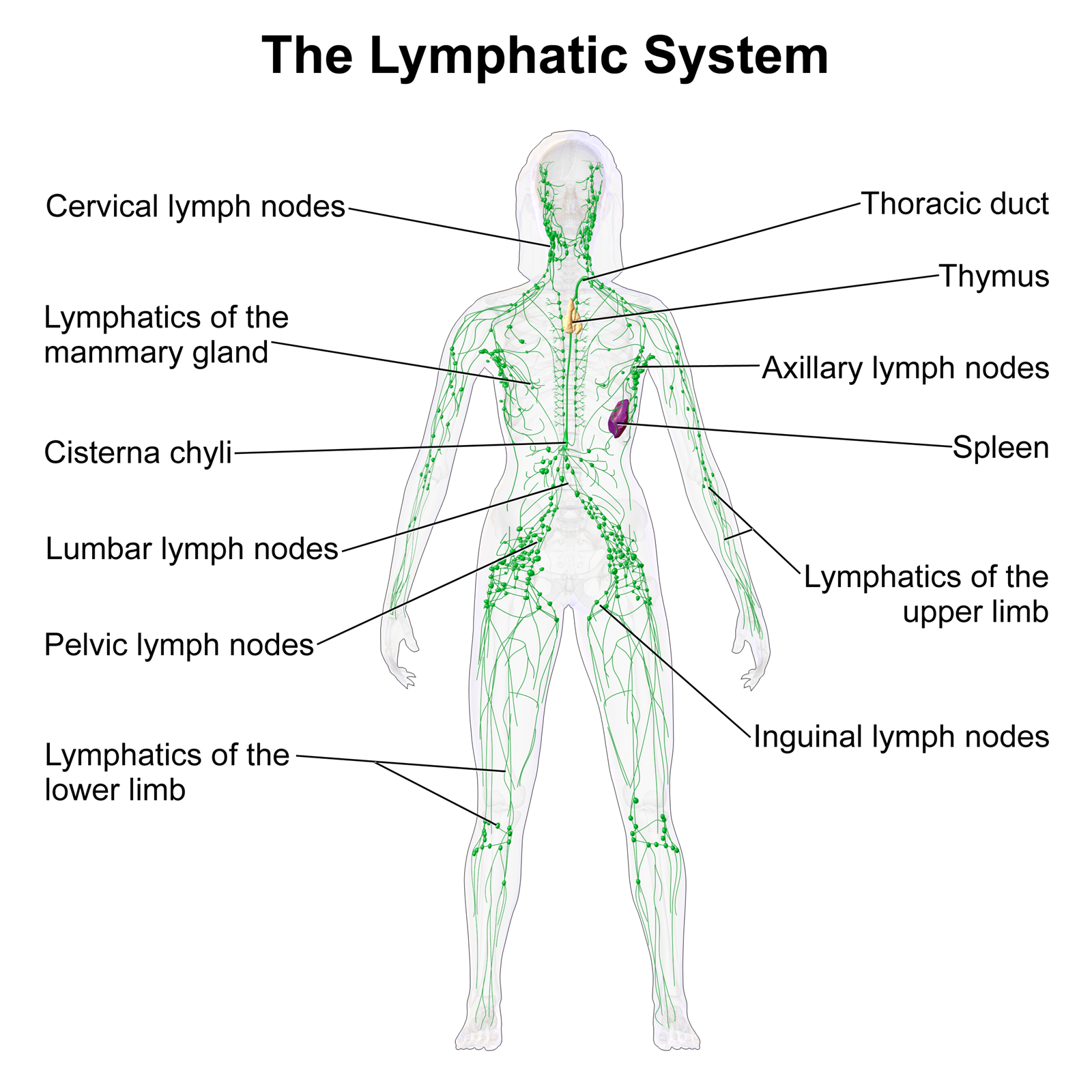 The palpable lymph nodes are almost gone. I don’t know about those inside my body, because they can only be checked through CT Scan. Those that can be felt, however, shrunk from the biggest one that is more than an inch big, down to the size of a pea.

I was prepared for the worst. Before my first session, I read up on side effects of my chemo protocol just so I’ll know what to expect. It turned out to be a bad idea as my anxiety level kicked into high gear. But I had to face it anyway, so I put on a brave face as much as I can.

For the first two days after the session, I did feel a bit nauseous and weak (I was bedridden on the second day). Other than that, my strength started to pick up on the third day.

I am really thankful that things are relatively easier this time around. I took three different medications for nausea, as well as Benadryl for allergies, for five days. A big round of applause for science, ladies and gents.

You never know where support will come from. Ever since I went public with my sickness (I initially kept it to a small circle of friends for a few months after diagnosis), friends from different stages of my life have been sending me encouraging messages. Old friendships were rekindled, memories were relived, a few funny stories were exchanged, and prayers were given. Even people who hurt me in the past sent me messages as well (that’s my A Walk to Remember story right there). I guess death snaps things in perspective.

With my strength coming back, I got to visit the office again after five months of working from home full time. I love this particular victory, because: a) I was able to travel alone again, as I’ve always needed someone with me considering how weak I was; and b) I got to spend time with my crazy friends again.

Also, friends are not friends if they’re not brutally honest. Consider this conversation:

It’s funny the first time, but if you hear it five times straight from different people, it would make you rethink the third helping of food you had the night before. Thank you, friends, for making me feel like a whale. I missed you too. 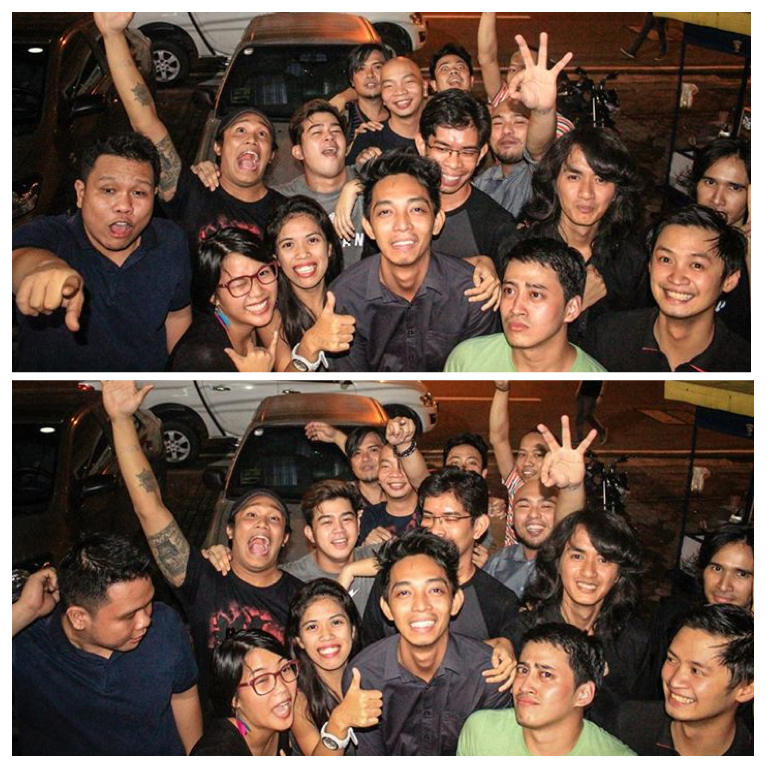 “Hi, you’re fat” is the Filipino way of saying “I missed you”

I’m thankful to be surrounded by some of the most caring bunch of friends in the world. They look out after my well-being (“Eat your Calderata!!”) and be there for me when I need it (you had me at “I will block my busy schedule for you whenever you need me”).

And then, there’s the kindness of strangers. Some of my followers on Tumblr have been sending me supportive messages as well. It’s rare to form friendships online, considering all the horror stories, but I did find a few rare gems on Tumblr.

There’s your family, and then there’s your second family. I have never heard of a company organizing a benefit gig for one of their employees. Xight Interactive, I will forever be grateful to all of you for not allowing me to fight alone. And yes, you people can pinch my cheeks whenever you want. I’m kidding. Please stop pinching my cheeks. Just stop. 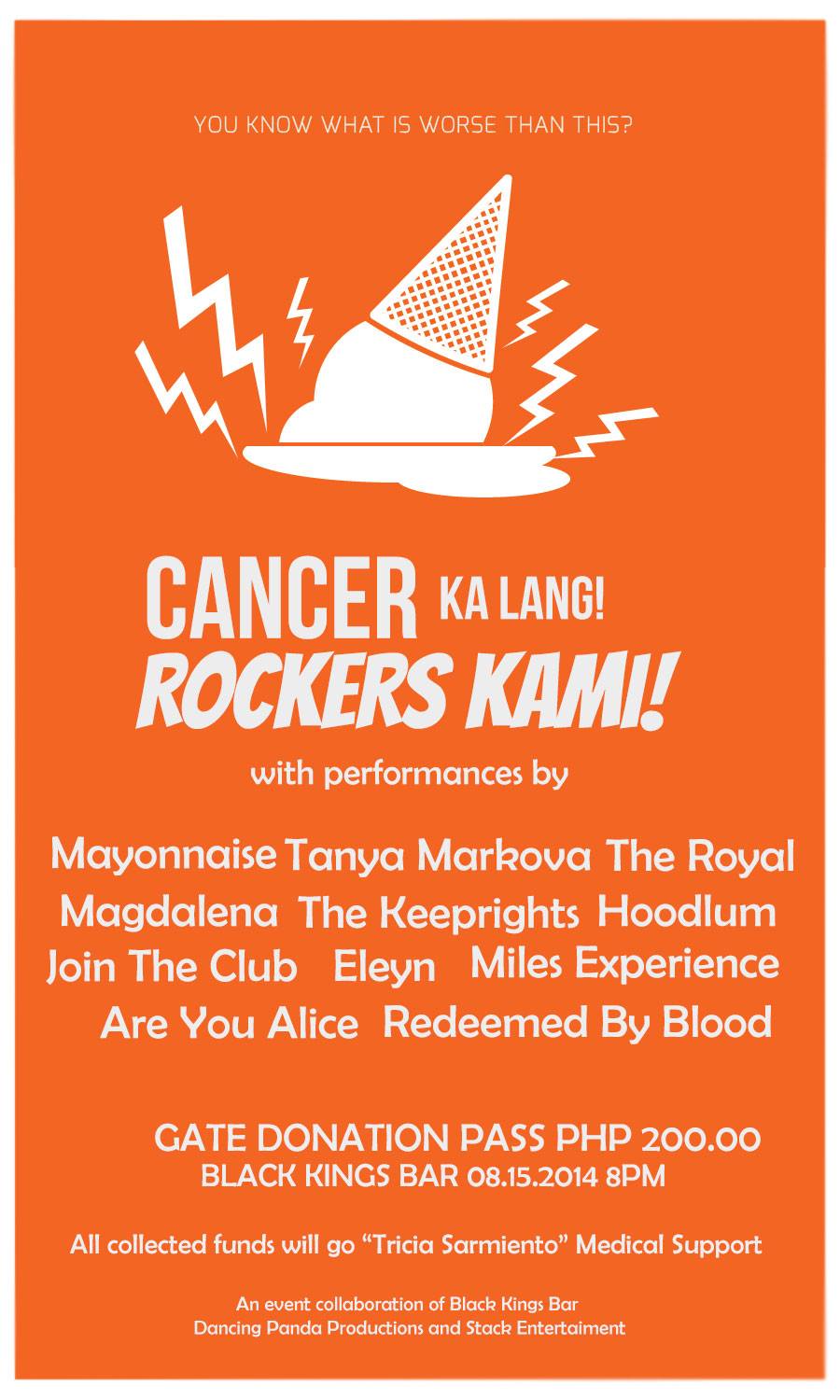 Rocking for a cause

I have six more sessions to go, depending on how well I respond to the treatment. Cheers to small victories, and here’s to looking forward for more. 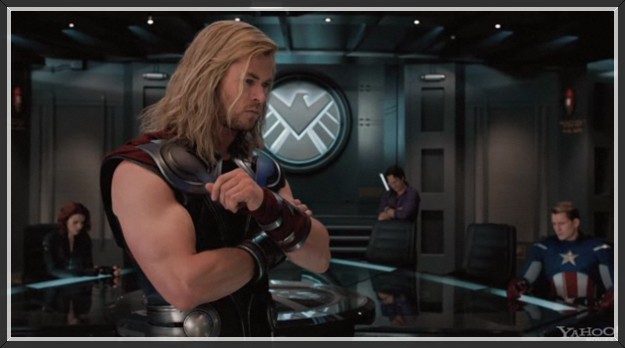 But seriously, someone send my story to Chris Hemsworth so I can fall in love with his accent be happy.